One by one, they return to Princeville

We have more of our nesters back.  KP531 met up with his mate, K407.  They have raised chicks in the same backyard where KP531’s former mate now nests with a male who used to return each year to a mate at the Kilauea Point National Wildlife Refuge.  K407 left her former mate, another female, to nest with K531 a few years ago.  Her previous mate now nests in the frontyard with another female.

No hard feelings, they all get along just fine.

Two years ago Beckett and his mate  raised a chick in the middle of the golf course.  Last year they were not so fortunate.  They incubated an egg, but the chick died during the hatching process.  Beckett’s younger sister is Georgia Gooney, who may be known to people who watched the nests on the Cornell webcam.  Their mother is nesting with another female across the street from the part of the golf course where Beckett nests.

Here’s hoping that Beckett and his mate raise a healthy chick this year.

Bad Mama is back.  She is the one who  abandons her egg every year.  I always hope her mate will find someone else to try to raise a chick with.  A couple of seasons ago I was observing some adult albatrosses on the golf course, and Bad Mama’s mate,KP515, landed nearby and walked towards them.  Sadly, they all chased him away.  Why?  Every year new birds join the group over there.  Why not him?  Since that incident, I have never seen him anywhere but near the area where he nests with Bad Mama.  There is a female across the street from him, blueKP216, whose mate failed to return a couple of seasons ago, and she raised her chick by herself for quite a long time.  She would be the perfect mate for KP515.  If I ran a matchmaking service for albatrosses, I would definitely introduce them to each other.  Unfortunately, he will undoubtedly stay with his aptly named mate and relive the moment when he returns to his nest to find the egg abandoned.

Larry is also here, waiting for his mate, Dora.  Last year they had an egg that broke.  The season before, Larry abandoned the nest.  But in the 2015-2016 season, they raised their chick Hakari successfully.  Good luck to them!  Larry is the bird who was named after a Sears repair man who has since retired.  I think it is an honor to have a chick named after you. 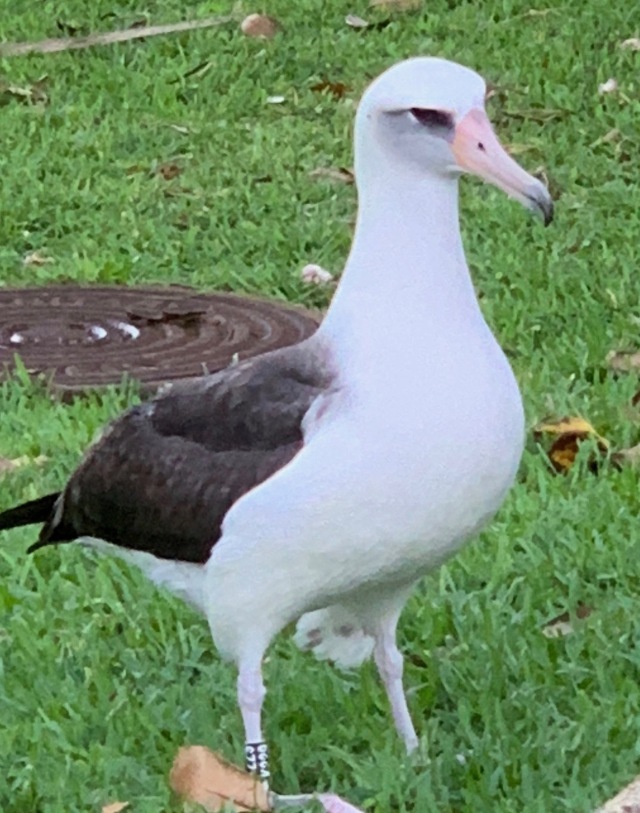 One last happy landing….Mr. Clackypants has arrived!  June’s father, Hope’s grandfather, is again where he belongs, in his favorite backyard.  Now those of us who have a special place in our albatross memories for him will be awaiting the arrival of Mrs. Clackypants, his long-time mate.  Both birds are at least in their early thirties, they were banded over 30 years ago.  We do not really know how long they live, there is no physiological test that can determine the age of an albatross.  That is something that only years of observation can help to determine.

More albatrosses have arrived, and I will share some of their stories as the days go by.

7 Responses to One by one, they return to Princeville