The first albatross to return to Princeville

I was a terrible keeper-of-the-blog last year, but I promise to be much better this season.  I will throw in some information about last year’s batch of birds in Princeville as the season progresses, in addition to stories of this year’s albatross visitors.

Last year, I saw my first albatross on November 10th.  She was in my neighbors’ backyard, and I cannot share a band number because there was no band on either leg.  Usually the nesting males are the first ones back, with some exceptions.  Unbanded is a female.  And the first one to return this year is also a female, as is her mate.  The two 8-year olds had their first nest together last year.  Unfortunately, they had 2 unfertilized eggs so there was no chick for them to raise.

K771, first albatross back, is Ana Malia.  Her parents have split up since she fledged.  Dad has found someone else to nest with, and Mom has not quite adjusted to not having a mate.  Mom has an interesting background.  She was banded on Oahu, but she fledged from Whale-Skate Island northwest of us.  That island was a victim of the rising sea level caused by climate change; it is now totally submerged, so she can never go back there again.  I hope she finds a new mate this season, she is a very good parent.

K771’s mate, K769, grew up a couple of yards away from Ana Malia.  Both of her parents have disappeared, and are probably deceased, unfortunately.  K769 is Barney.  Since the mother of my last two chicks is named Roger, I will not complain about Barney’s name.

This is Ana Malia giving herself a good grooming.  She is currently sitting right across the street from where she and Barney had their nest last year.  She must figure that this is a good spot for meeting up with her mate.  Nesters almost always come back to the area where they nested the year before. 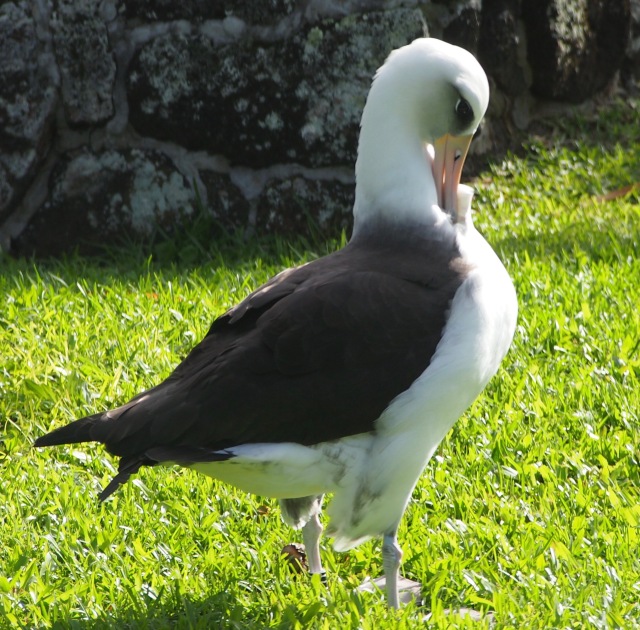 9 Responses to The first albatross to return to Princeville