I am always so relieved when Joseph, Princeville’s great-grandfather, comes back to Kauai. 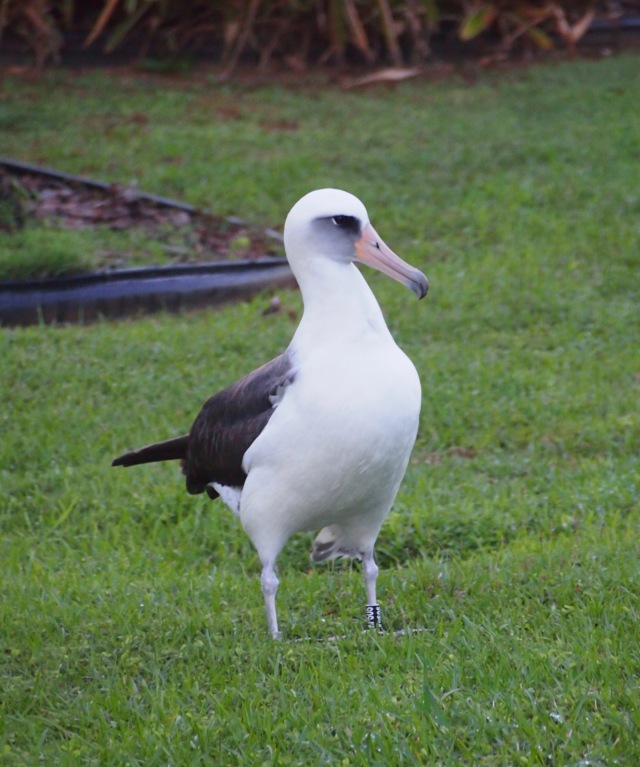 He has an interesting history.

Joseph was originally banded as an adult at the Pacific Missile Range Facility, the navy base on Kauai, on March 3, 1989.  The earliest we have had chicks come back to land as adults is at the age of 3, so he was at least 3 years old, which would make him 31 or older today.  He was rebanded with KP505 in 2004.

Joseph and KP729 had two chicks.

I was at Foodland one day in 2009 when my neighbor and fellow albatross observer, Bob Waid, called across to me, “Hey, Cathy, is Obama still here?”

A hush fell over the Foodland crowd.

Joseph and KP729 did not nest in the 2009-2010 season and Joseph began spending a lot of time with KP792.  Some helpful albatross fans suggested that Joseph had dyslexia, and just mixed their band numbers up.

KP792 did not return in the 2013-2014 season.  Joseph made a simple nest in the bushes he prefers.  Various albatrosses came by and did little displays with him in the nest.  It seemed to this observer that he was auditioning females to be his new mate.  His former mate, KP729 came by, and he chased her away.

During that season, he met Elaine, who had raised 8 chicks with her previous mate.  Elaine and her mate nested year after year at Dragon House, down the street from Joseph’s favorite yard.  Elaine’s mate had disappeared during the 2015-2016 season, leaving Elaine to incubate their egg from December 27th until the chick hatched on February 5th.  The little chick died shortly after hatching.

If I ran a dating service for albatrosses, Elaine is the one I would have picked for Joseph, and Joseph is the one I would have picked for Elaine.  They both take parenting very seriously, and both lost their mates.  When one member of a couple that has a pattern of nesting together in the same area year after year does not return, I assume that individual has died.  They are so programmed to return to each other, either to nest or to renew their bond so they can nest the following year.

When I see Elaine, I will post that information for all of the Joseph and Dragon House fans out there.  I know the readers of this blog get attached to particular albatrosses, and I am happy to encourage their devotion.