Larry’s back in town

The third albatross to return to Princeville is Larry, K229.  Larry was named after a Sears repairman.  When I became the data collector here, I decided that homeowners would get to name the chicks that shared their lawns with them.  My neighbors, Roger and C, were seeing the Sears repairman more than  anyone else at the time, so Larry got his name. 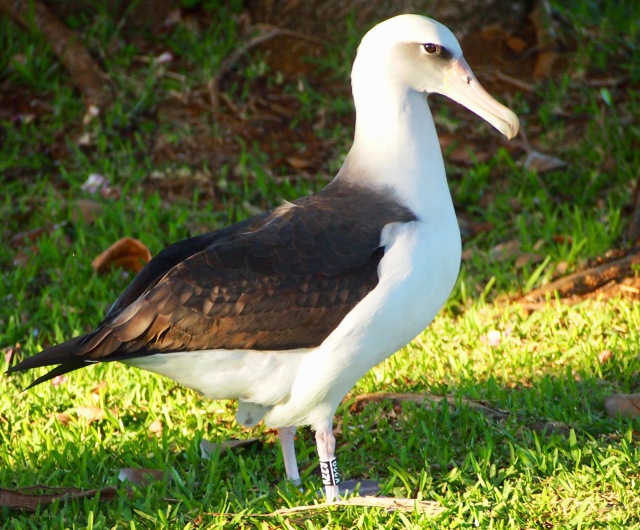 Larry is a local boy, his mothers always nest in my neighborhood.  They periodically have a fertile egg; Larry was one of them.  He hatched in 2007.  He met a local girl, Dora, in 2013.  The following two years their nesting efforts were not successful.  But in the 2015-2016 season, they had Hakari.

Last season, unfortunately, Larry abandoned their egg when it was about 4 weeks old.  Four days later Dora came back and incubated it.  Then she abandoned it for a few days.  She sat on it for a couple of days, then Larry came back and they left the egg for good.  I do not know why Larry abandoned the egg in the first place.  It is not uncommon for a first-time nester to leave the egg; it is less likely that an albatross who has already raised a chick does that.

I will be looking for Dora to join Larry soon.  They are both very young, they have many years of chick rearing ahead of them.  It is my good fortune that they have chosen to raise their chicks about a block away from my house.

When one of my neighbors was first looking for a house here he saw an albatross nesting in the yard of the vacant house across the street from me.  The deal was sealed.  “That’s the one!” he said.  It says a lot about my neighborhood, and even more about my neighbors.