As of yesterday, there were 4 albatrosses in Princeville.  I told you about KP400.  The others live down the block from me.

I watched K233 get banded by Brenda Zaun, USFWS wildlife biologist, in 2007.  Since he was unbanded, nothing is known about where he came from or how old he is.  His mate, purpleO324, was originally banded on Whale-Skate Island in French Frigate Shoals in the Northwest Hawaiian Islands in June of 1989.  Then she was rebanded by Lindsay Young at the albatross colony at Kaena Point, Oahu.  By the late 1990s, Whale-Skate Island was completely submerged, thanks to the rising sea level associated with climate change, so this albatross could not return to her original home if she wanted to.  She first came to Princeville in 2008.  She and K233 started spending time together. 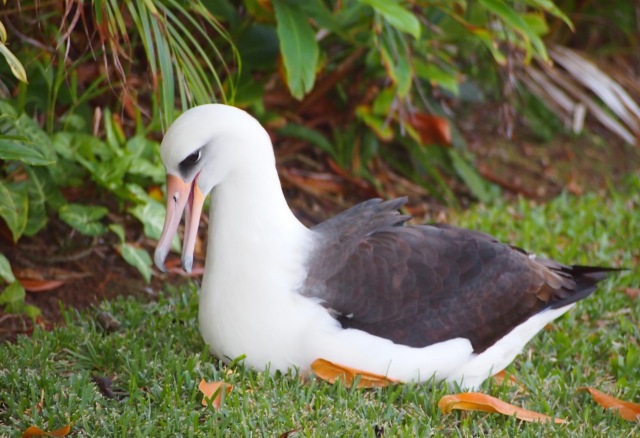 K233 talking to himself

They first nested in the 2009-2010 season, and raised a healthy chick.  They have raised 3 more since then.

The other two males that returned were sitting about 10 feet away from each other.  If they were people, this part of the story would be a soap opera.  To make this a bit easier, I am going to give them names.  KP424 will be Bob, KP531 is Steve, KP467 is Mary and K112/A478 is Ann.

When I first started to observe, Steve and Mary were a couple.  In fact, they successfully raised 6 chicks in a row, which is quite an accomplishment.  The following season, 2010-2011, Mary laid an egg but she would not sit on it, and neither would Steve.  Perhaps they knew if was time for a rest.  During this season, Mary was in Princeville for 25 days; Steve was here for 50.  During those 50 days, he spent some time with Mary, but he was also displaying with other females.  In fact, he came to know Ann during this time, and they engaged in the quiet contact I associate with nesting couples.

In the 2011-2012 season, both Mary and Ann laid eggs, and I would assume that Steve had fathered them both.  He had to decide which egg he would help incubate, and he picked Ann’s.  Mary had to leave her egg eventually, and it never had a chance to develop.

I wrote about Steve and Ann’s relationship in my blog post of January 6, 2015, so I will not repeat that.  It is another episode of the albatross soap opera.

And what happened to Mary after Steve left her for Ann?  She met Bob.

Bob nested in Princeville in the 1993-1994 season.  I have never seen an albatross younger than 5 nest, so he is probably at least 28 years old.  Since at least 2005, he was nesting at the Kilauea Point National Wildlife Refuge.  But every year he stopped first in Princeville, staying here for 2 to 10 days before flying to the refuge to nest with his partner.

His partner eventually failed to return to the refuge, and Bob relocated to Princeville.  In the 2012-2013 season, he spent many quality hours here with Mary, now on her own after Steve left her.  Bob and Mary nested in the 2013-2014 and 2014-2015 seasons and raised two chicks together.  They came back last season, but did not nest.  However, they did spend time together here, and I saw them displaying together and sitting quietly grooming each other.

If Bob and Steve were humans, they would probably not be as likely to share my neighbor’s back yard.

This is why I must observe them every day.  Their lives are rich in variation and filled with surprises.  As I always say, the more I learn about them the less I “know.”  They always  challenge what I think I understand about them and keep me interested enough to keep trying to figure out what it is to be an albatross.