Posted on January 8, 2016 by tradewindsla 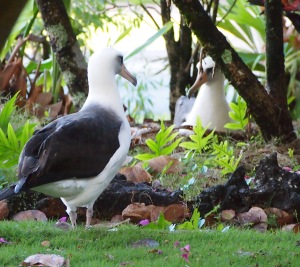 The bird on the left is KP643, who has been spending some non-nesting time in my neighborhood with her mate, KP338.  They are both females and they have been nesting in this area for longer than I have been collecting data.  They have raised 4 chicks together.

2005-2006: Hanai, the male (I think) currently sitting on my nest, was a PMRF chick, part of a program to replace infertile eggs on the north shore with good eggs from albatrosses at the Pacific Missile Range Facility.

2007-2008:  A chick that was named Lilikoi at her original nest was moved by a biologist to be raised by 643 and 338 when her father did not return to the nest; her biological mother had to leave her to find food to keep herself alive.  643 and 338 had an infertile egg which they were diligently incubating.  They were delighted to be given a chick to raise.  The owners of the property named her Logan, after the son they were expecting.

The next 5 years they laid eggs and incubated them faithfully, although they were all infertile.

And last year, they raised Pip, who fledged in July.

Back to the photograph at the beginning of this post

The albatross on the right is 643’s son, Hanai, who is sitting on his first nest waiting for his mate to return.

Did they recognize each other?  I would guess that they did.  They may all look alike to us, but they can certainly tell each other apart.  Hanai spent about 5 months anticipating his mothers’ visits.  Imagine a chick living on Midway, with about half a million nests.  Distinguishing Mom from all the other parents could be a matter of life and death.  It is also critically important for Mom to be able pick her baby out of the crowds of chicks.

Furthermore, these are birds who use their sense of smell to help them to locate food.  Does their own chick smell different from another?  Of course this opens a new bag of questions.  How would scientists test whether a parent could recognize the presence of a chick by smell?  Would relatives have a similar odor?  If so, what about a PMRF chick, who had different biological parents?

Did Hanai clack at his mother the way he clacks at any albatross or human that he feels is too close to his nest?  Clacking, by the way, refers to a sound they make by opening and closing their bills very fast.  It varies in speed and loudness, depending on the occasion.

Hanai gave his mother a few slow clacks, not the frantic ones reserved for most intruders.  Everyone gets the clacking, some more than others.  Now that he is used to seeing me walking my dog by his nest, he gives us one brief loud one rather than the usual noisy “Don’t come any closer!” sequence.  Chico has learned to avoid the big noisy birds so he is not a clack-worthy threat.

One of the greatest privileges of observing the albatrosses frequently and over many years is getting to know who is related to whom and to watch their interactions.  Another one is seeing the chicks who fledged from here grow up and return to have their own chicks, adding to the intertwined family trees that connect these birds to each other.  It all combines to make Princeville the perfect place for people whose curiosity about the Laysan albatross has not yet been sated by what has been written about them.  There are way more questions than there are answers.

For those of us who know that there is still much to learn about the Laysan albatross, that is as it should be.