It has been a long time between albatrosses.  They are now starting their return to Princeville.  The first ones are usually the experienced nesters and a few who found a mate last season and will hopefully be nesting with them for the first time.  But there are always some of the older non-nesters, too.

Between November 10th and November 14th, I saw just 4 birds, three nesters and one unbanded bird.  Then yesterday, there were suddenly 7 more.

KP304 was one of the first back, and is sitting in the very same area where he first pecked his way out of an egg in 2002.  He met his mate there and they raised 5 chicks together, but last year their chick died early in the season.  Yesterday he was joined by his mate, K674.  They were gently grooming each other when I saw them.  I always think of that as married couple behavior, since it is usually seen in couples who are planning to nest together. 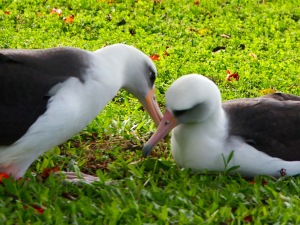 KP400 is sitting next door to his favorite nest site.  He returned to the area he fledged from 13 years ago.  His first mate failed to return one season, and last year his new mate laid their first egg.  Unfortunately, the embryo stopped developing early and the egg broke.

KP302 is not nesting near the spot where he lived as a chick during the 2001-2002 season.  Usually they do return to the same area, but not always.  Last year the chick that he and his mate were raising died.  It is not common for chicks to die, but last year we lost three of them.

I have no information about the two unbanded albatrosses that are here.  I have no idea where they came from or whether I have seen them before.  They could be birds I have seen many times before, or they might have flown here from another location, perhaps even Midway.

One female that has been coming here since I first started to collect data is also back.  Unfortunately, she often abandons her eggs.  I wish her mate would find a female who would complement his parental skills so he would never again have to come back to an abandoned egg at his nest, but I know he will be joining his long-time partner.  I wish he would surprise me this season.  I feel sorry for the female, but even more sorry for her mate.

Last season one male in my neighborhood took turns with his mate incubating a bad egg long past its due date.  Larry and Dora incubated their egg way past the time when it should have hatched.  The nest was safely hidden behind some bushes.  Their first nest, the season before, had been just a few feet away from the street.  They abandoned their first egg soon after Dora laid it, not unusual behavior for first-time parents.  Seeing the care they took last season with the bad egg and their choice of such a good nest site, I think they will be good parents.

A female on the golf course is waiting for her female partner.  Once in 6 years they had a good egg; I named their chick Miracle.

The other albatrosses who have returned include two who have never nested before.  One  of these has been coming here since 2006.  Will she ever find a mate?

The most difficult part of waiting for them to return is the recognition that some nesters will not be coming back.  A non-nester may move to another area in Kaua’i, but if a nester disappears he most likely died.  At least, I have never seen one return here, nor have I heard of one ending up in another part of Kaua’i.  The surviving mate will probably wait somewhere near the location of their last nest, then this year or next season will begin the long process of finding someone else to raise a chick with.  Sadly, some of them have been searching for several years or more.

We may not have many chicks this year, which has been predicted to be a big El Nino year.  The ocean water is warming up and this affects the food chain, from the tiniest organism up to apex predators like albatrosses.  If the parents know that they will have a difficult time finding food for themselves, they are less likely to attempt to raise a chick.

Climate change could bring more El Ninos in the future, affecting many of the seabirds who depend on a stable ocean environment.  Albatross numbers will go down as they lose valuable nesting islands to the rising sea level and as food sources dwindle.  We can make their lives in Hawaii less stressful by staying a good distance away from them, by respecting their right to live peacefully in a world they are forced to share with beings that sometimes feel compelled to stand just a few feet away from them.

There are people who cannot enjoy watching an animal that is not noticing them back.  They are simply unable to stand in the background and quietly observe.  But to learn about the albatross  we must depend upon patience, respect, and careful observation.  It is impossible to see their normal behavior when they are trying to cope with intruders.

The albatross will reward our good behavior not by looking up at us, but by not even noticing our presence.