An assortment of albatrosses

In Princeville we have trained all of the albatross chicks to sit by signs with their names on them to make it easier to see what names homeowners have given to the chicks living in their yards. 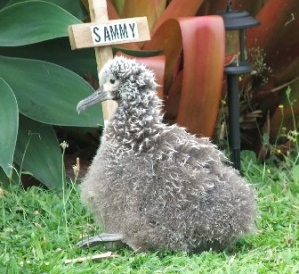 Actually, the chick had waddled out into the yard and just happened to plop by the sign made by the homeowner.

The albatross on the left is a female, KP467.  The adult standing next to his chick is her former mate, KP531.  Last year I told their story.  They were a couple since at least 2004.  Two years ago, they abandoned their egg early in the season.  KP531 kept returning to the area and met another female, K112, and they raised a chick together last year.  KP467 has not found a new mate yet.  It is very human to try to read her thoughts as she watches her former mate, but we are so far removed from their world that I would caution everyone to just enjoy watching them without trying to read their albatross minds.

The chick in this photo is starting to get his white adult feathers.  Those feathers appear first on the stomach and start developing from the bottom up. 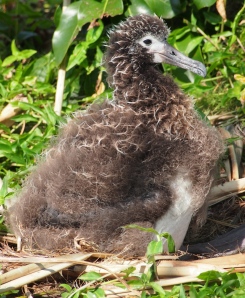 Chick is getting his adult feathers

By the time the chick is ready to fledge, the important flight feathers have to be fully developed.  However, the chicks usually have some baby fuzz left on their heads. 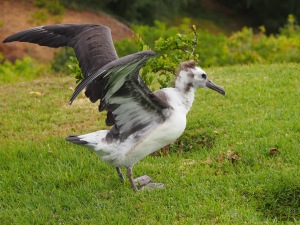 Feeling the wind beneath his wings

So far, I have seen 1oo non-nesters in Princeville.  That is 11 more than I saw by this time last year.  Later on I will do a breakdown of who these non-nesters are.