I am especially fond of the ones I call the old-timers, the albatrosses I have watched since I first started collecting data eight years ago.  Among these are KP338 and KP643, who nested this season across the street from me.  For as long as I have been collecting data, these two have been a couple.  They are both females.

KP338 was banded as a chick in 1998 in Princeville.   Nothing is known about KP643’s background.  She was banded as an adult in the 2004-2005 season.  When an adult is banded we assume that bird to be 3 years old, the youngest age at which a fledgling will return to land.  Wisdom, the 62-year old Laysan albatross currently nesting on Midway, was banded as an adult, so she is very likely even older than her estimated age.  It pains me to see unbanded adult birds.  Is this unbanded one the bird you saw in the same area yesterday?  Is that unbanded one the same bird that was displaying with one of the banded ones last week?  In Kaua’i, the albatrosses travel between colonies, so I do not even know if other observers have seen any of these birds.  This data can never be recovered.

KP338 nested with KP643 for the first time in the 2005-2006 season.  They each laid an egg and the one they chose to incubate was infertile.  They were given an egg from a nest at the Pacific Missile Range Facility and raised a healthy chick.

In 2006-2007 they did not nest.  However, KP338 was in the neighborhood on 14 days, spread out from December 9th until February 18th.  KP643 spent 19 days on land; the first day was December 21st and the last was March 14th.  During that time, they displayed together three times.  Twice they sat together engaged in quiet grooming, the behavior typical of mated couples.  Of course I may have missed some of their meetings, since I do not observe them 24 hours a day.  If I observed them once a week or less, I would have been lucky to see any of these get-togethers, since there were five spread out over more than two months.

In 2007-2008, they raised another couple’s chick successfully.  The mother of the chick had incubated the egg and stayed with the chick when he hatched, but left after she had spent 45  days at the nest.  The chick was very young to be left alone.  The father never returned.

This season they each laid an egg near each other, but both sat on one egg and the other was abandoned.  They built the nest next to my neighbors’ driveway.   Unfortunately, when Lindsay and Eric candled the egg in December they found it to be unviable.  The egg swap with the PMRF did not happen this year, so the couple was left with their bad egg. 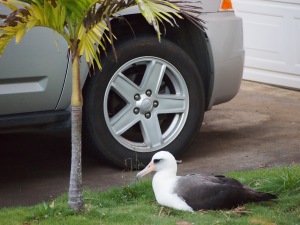 These two faithfully took turns incubating their egg.  Then KP338 began leaving it alone, sitting nearby and waiting for her mate to return.  KP643 did come back and then she continued the futile incubation.  At one point I saw her standing and talking to the egg.  When the chicks start to hatch, they talk back and forth with the parent on the egg.  For the albatrosses in a crowded area like Midway, this will help the two to identify each other.  In this case there was not a chick in the egg to respond to her.

She left the nest on March 17th, but even after that she sat briefly on the egg.  My neighbors, Louise and Steve, who shared their yard with these two albatrosses, watched out over them and went out of their way to keep the surrounding area quiet and safe for them.  Louise assembled a film showing them changing nest duties.  You can see it on her blog:

Sometimes albatrosses abandon their nests.  Some first-time nesters do.  Perhaps they do not have the patience required to stay for days on end in one spot,  sitting through all types of weather from heavy storms to hot sun.  For some birds that seems to take practice getting used to.  Sometimes even experienced nesters leave the nest.   None of these albatrosses are being neglectful, or uncaring, or any other negative adjective we can think of.  They are being albatrosses, no more, no less.  They operate on instinct, which we have little understanding of.

The instincts of these two albatrosses led them to stay with their egg far longer than the requisite time for hatching a viable egg.  Most eggs hatch around the 65th day after the egg is laid.  Last year, every egg hatched on day 64,65 or 66. This couple shared incubation duties for 104 days.

Could I possibly use “abandon” to describe these two finally leaving their egg?

It seems a shabby word to select to acknowledge the end of the hours each one spent at the nest, keeping the egg warm and safe, waiting for her partner to return.

2 Responses to Abandoning a nest