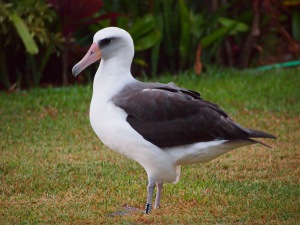 I live in a neighborhood filled with albatross fans, people who look forward to seeing them return every year to nest or to look for a mate.  Two of their greatest friends are my neighbors, Denise and Carl.  I still remember when an albatross built a nest right under their drain pipe, and Carl immediately went out and bought an extension for it so the nest would not be inundated with the first heavy rain.

Last night around 2:30 A.M., Denise heard that familiar “clap-clap-clap” that we all recognize as the clacking sound an albatross makes with his bill.  Sometimes they do this if humans or other animals are too close to them, sometimes they just do it because they want to, for no reason that we humans can determine.

After Carl alerted me this morning to his visitor, I found out that yesterday evening around 6 P.M. another neighbor, Bob Waid (his wonderful albatross blog about the birds in our neighborhood is http://www.albatrosskauai.com), saw KP424 land at the bluff at the end of our road, then walk out into the neighborhood.   This is two days earlier than I have ever seen or heard of the first albatross arriving in Princeville.

Who is our first visitor?  Of all birds, the first to return is KP424, who spends from 2 to 10 days here in Princeville before flying on to nest with his (or her) mate every year at the Kilauea Point National Wildlife Refuge.  I have observed this every year that I have been collecting data, since 2005.  There is a record of KP424 nesting in Princeville in the 1993-1994 season.  Unfortunately, records that were kept in the 1990s were intermittent, so I have no way of knowing when he stopped nesting here and who his mate was in Princeville.  KP424’s age is unknown, but adult albatrosses are always assumed to be three; so using 1993 as a baseline, he is at least 22 years old.

Why does this bird spend valuable time coming back to Princeville?  In 8 years I have seen him displaying with other birds just twice.  He always sits by himself in the same backyard,  never anywhere else.  Is that where he once nested?  Were those happier times?  Did he feel a stronger bond with that mate?  Or is this simply force of habit, something the bird has always done and therefore will continue to do, year after year.  Perhaps KP424 would prefer to nest in Princeville and is hoping his mate will join him here.  Who knows?  Since I have no way of asking him, I have no idea what is going through his head, what compels him to take time away from meeting his mate at the refuge.  None of us have any way of determining what motivates the albatrosses because none of us can think like one.

I do know that I will be seeing more and more albatrosses in my neighborhood and in other parts of Princeville.  Each season I hope that they will all make it back, but there are always some who do not.  Some may have found a new albatross meeting place to try, others may have died of  the types of natural causes that have claimed them through their long history on earth.  Still others may have been attracted to the baited hooks used by some long-line fishing boats.  In August, U.S.Fish and Wildlife Service issued a permit which allows long-line fisheries to kill Laysan and black-footed albatrosses without requiring measures that could lessen the number of birds killed.  Two wildlife conservation groups are fighting it, and I wish them both success.

Thank you, everyone who cares about these birds and will fight to keep them safe.

Here’s to seeing plenty of fat, healthy chicks this season!

1 Response to The first albatross returns….