As of yesterday afternoon, 7 chicks had fledged and 13 remained.  The first one fledged last Wednesday.  The weather conditions are perfect for fledging, we have been having strong winds off of the ocean, with occasional showers.

Some of these chicks you may remember from my previous posts.  The first one to leave was the first chick raised by KP531 and K112.  KP531 left his long-time mate this year.  I wrote about this saga on November 27th and November 30th.  Those of you who walk through my neighborhood may remember seeing this chick sitting on a big pile of dirt in the center of Keoniana Circle.  He spent lots of time moving stuff around.  Here is a photo:

One of the fledglings was a PMRF chick, whose adoptive parents are KP753 and K672; the latter is a bird that was banded at the PMRF and rebanded in Princeville.  I wrote about the PMRF egg swap on December 18th.

If you check my June 17th entry, you will see a film of a chick trying his wings.  His nest was on an empty lot overlooking the Prince golf course, and the last time I saw him he was sitting halfway down the part of the property that sloped down towards the course.  When I checked for him on June 23rd he was gone.  There have been constant strong ocean breezes off of that golf course, so I would bet he caught one.  He may have stopped along the way, then picked it up again.  There is an ocean bluff at the end of the golf course.  It is very important for chicks whose nests are on land quite a bit above sea level (not on a small, flattish island surrounded by ocean, like Midway) to have the uplift provided by a cliff, and to be able to see the ocean from there.  They cannot fly high enough to fly all the way from an inland area and would be put in harm’s way if they had to somehow find the ocean while making short, low flights.

One bird whose nest is in a yard bordering a golf course had disappeared by late afternoon, June 25th.  A resident saw him in walk down the fairway, stop at a sand trap as though  it had him stumped, then walk back to his nest area.  I am guessing he finally figured out his way around it.  The ocean breezes have been strong on the golf course this season.  A few years ago a chick on this course ended up near the main road through Princeville.  The trade winds were not very strong that summer, and he may have started walking when he got the urge to fledge, or a breeze could have been blowing in the other direction, or he flew with the breeze instead of against it.  At any rate, we had to help him to a spot that was safe, with an ocean bluff just tailored for a fledgling’s first flight.

This is “Scotty,” the last bird to be banded in Princeville, sitting next to his father: 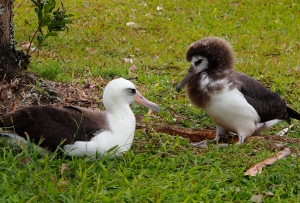 Scotty and his father, KP400

Scotty fledged on June 26th.  He walked all the way down the street his nest was on to an empty lot overlooking the golf course, then took off from there, out over the golf course to the ocean.

And I will miss each and every one!