This week all of the 20 Princeville chicks were banded.  On one leg they have a small silver band.  This is the official band recorded with the North American Bird Banding Laboratory, under the auspices of the United States Geological Survey.  Each albatross is given a unique 9-digit number by the BBL.  The band also has a toll-free number and a website address; if someone finds a dead bird or a detached band, they are asked to report their discovery.

On the other leg, the bander puts on an auxiliary band so that observers can record the number while watching the bird with binoculars.  Every albatross band has one or two letters followed by three numbers.  Each location has a unique color/letter combination.  Sometimes adults here need to be banded, and they are given the same type of bands as the chicks.  This year, all birds banded on Kaua’i were given black bands with white letters and numbers.  Birds banded at the Pacific Missile Range Facility have bands with P###, on the rest of Kaua’i the bands begin with K### or A###.

All of the birds on the North Shore were banded by Kim Uyehara or Bongo Lee or by someone they are training to be a bander.  Kim is the Fish and Wildlife biologist on Kaua’i and she is responsible for banding the albatrosses at the Kilauea Point National Wildlife Refuge.  Bongo Lee is the Wildlife Biologist who is in charge of the banding of all of the chicks on private property.  She also bands the nenes, which I have been told is a lot more difficult than banding albatross chicks.  She works for the Division of Forestry and Wildlife, under the Department of Land and Natural Resources, for the state of Hawaii.  She was assisted by two DOFAW employees, Lindsey Ibara, Wildlife Biologist, and Jarrett Fujioka, Wildlife Technician, and volunteer Janelle Pang, a University of Hawaii at Manoa Animal Science Graduate student.  Marilou Knight, who works with Save Our Shearwaters, worked at both KPNWR and Princeville to collect feathers from chicks to be used for DNA tests to determine their sexes.

It helps to distract the bird so someone can sneak up from behind and grab him.

The chick is surrounded!

Bongo is holding the chick behind his neck, making sure that his wings are safely folded up close to his body; this prevents injuries to the bird.  If this were an adult, Bongo would be holding the bill closed so he didn’t bite her.  The chicks are not as strong as adults and not as aggressive.

Bongo holds chick while Lindsey does the banding.

In this photo, the chick’s father is waiting in the background while Bongo bands the chick, held by Janelle.  Three of the chicks had parents with them when the banding crew arrived.  In each case, the parent moved away but went back to the chick when banding was over.

Chick’s father waits for banding to be over.

DOFAW volunteers John Bowen and Roger Brookman collected boluses found near the chicks.  Here John is waiting for a golf course chick to be banded. 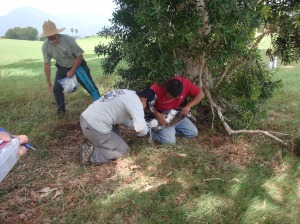 Some of the materials fed to the chick by the parent are indigestible; when the chick reaches a certain age, he is able to regurgitate these items.  Here are some objects found at one nest: 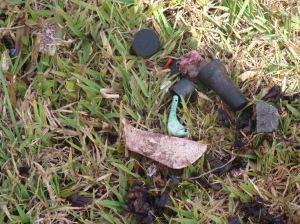 The natural objects that would be found in a bolus are:  squid beaks, which are made of chitin, a substance which is also found in the exoskeletons of insects and crustaceans; and small bits of lightweight pumice stones, which may have flying fish eggs on them.  The unnatural objects are plastic, from small pieces to items as large as disposable lighters and toothbrushes.  Young chicks are unable to regurgitate, and sometimes accumulate so much plastic in their stomachs that they have not room for other food or even for water.  For more information about plastic in a young albatrosses diet, please see the “It’s dinnertime” entry from June 13th.

Without banding, we would have no way to identify these birds and their lives would remain a mystery.  Their band numbers are like names to an experienced observer.  Every November I look forward to seeing my old friends, like KP874 and KP642, who nested on my lawn 3 years in a row.  I also keep an eye out for the two chicks they raised in my yard, K234 and K555.  Although the literature says they return in 3 or 4 years, it is not uncommon for albatrosses to return to their nest area when they are older.  Last year I had a 7-year old who returned for the first time— the year before that, an 8-year old.  When I see “my” chicks, it will be cause for celebration.

So thanks to Bongo and her crew, to all the volunteers who helped, and to the homeowners who help to protect these birds.  And thank you, Laysan albatrosses, for putting up with the Homo sapiens who sometimes annoy you and who keep showing up in the backgrounds of your lives, and sometimes, I’m afraid, much closer than that.