Checking on the albatrosses every day is a lot of work, but this is the time of year when I am rewarded for every moment.  Hatching has begun in Princeville.

Chicks usually take several days to break out of their shells.  The parents do not help, other than to carry on a conversation with the baby.  In a colony like Midway, with hundreds of thousands of nests, being able to identify a baby’s voice helps a parent save time locating the little one.  This is especially important when the chick gets older and starts moving further away from the nest.  It’s much easier for the parents of Princeville chicks to find their babies, but they still arrive vocalizing.

The parent in the photo below returned to the nest as the chick was pipping, or pecking through the egg shell.  The babies have a temporary “egg tooth,” a hardened bump on the end of the upper bill that helps them break through.  Yesterday he father of this chick was at the nest and did not want to leave, so the mother was actually trying to push him off of the nest.  When there’s just an egg in the nest, the incubating parent does not need to be encouraged to go out to sea and get something to eat, but when the chick is at least partially visible, a good shove may be necessary to get that parent off the nest.  The shove must have worked, because the mother was the one encouraging the chick today.  I guarantee the father will be back within a few days to see his new baby. 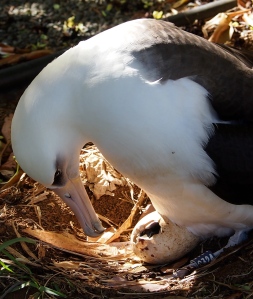