I have been checking the usual places for albatrosses for the last few days.  The first one arrived at the Kilauea Point National Wildlife Refuge on November 9th, which is a bit later than usual.  Princeville always has a first spotting after the lighthouse, and this year I saw my premiere albatross on November 1oth.

Nesters usually precede all of the others;  they return to agreed upon meeting places, then wait for the mates to arrive.  Sometimes a few of the older non-nesters come in early, also.  While walking my dog I caught a glimpse of a large bird flying over my neighbors’ house, and as I walked in that direction, Bob told me that an albatross had landed.  He thought it might be one of his birds, perhaps Mr. Clackypants, but when we saw the albatross walking at a brisk pace towards the street, we both knew this one had another destination in mind.

She walked quickly across the road, through another neighbor’s yard, and ended up in the backyard voted “most popular” by several generations of albatrosses.  She sat down and the waiting began. 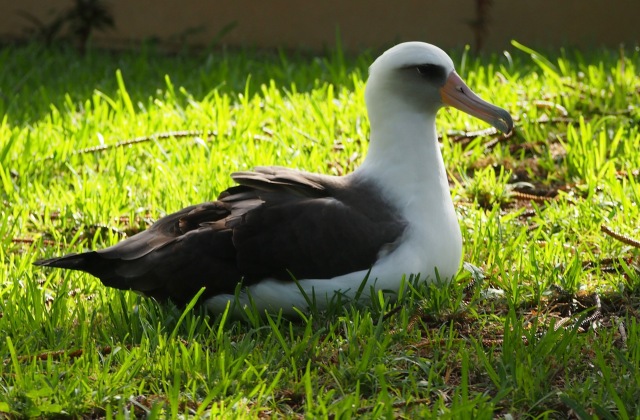 I love to be able to tell stories about the first bird back.  After 12 years of observing them almost every day they are in Princeville, I know these birds as well as I know my old friends.  I have anecdotes to share about most of them.  Unfortunately, this one is unbanded.

Every year I keep a record of who was doing what on which day.  I vaguely remembered that one of my local banded birds was spending quality time with an unbanded bird, so I checked him out in my Excel file.  Yes!  If I made a circle around Unbanded with a radius of 10 feet, that would be the area where I saw these two sitting close together.  K232 is 10 year old, and hatched during a year DNA testing was done to determine the sexes of the Kauai albatrosses.  It was part of a project organized by Lindsay Young, who has been studying the Laysan albatrosses in Hawaii longer than anyone and probably holds the record for the number of scientific articles about them.  She was studying the female/female couples, which make up about 30% of all nesters.  We do not have any male/male couples, since an egg is the minimum requirement for nesting.  K232 is a male, which makes Unbanded a female.

The spot they spent all their time in last season is not far from where K232 spent his chickhood.  His parents always nested in that yard or next door.  Some albatrosses are faithful to a small area, others move around more.  If K232 takes after his parents, he will not go very far from the spot where Unbanded is comfortably resting.  This yard is beginning to look like Midway.

Of course, I could be wrong about this unbanded bird.  They have fooled me plenty of times before, and I do not begrudge them their right to put one over on me again.  It is part of the fun of being an albatross observer.*

*Please remind me that I said that the next time I am climbing a cliff after a fledgling.