Getting ready to leave

Saturday was a big day in Albatross Land; two chicks fledged that morning.

One was Orion, who disappeared from a neighbor’s front yard on Friday.  I have no idea where he went, but by the next morning he had made his way to a grassy circle at the end of my street, a plot of land that was inhabited by two chicks from other yards.  I saw him there when I was walking my dog around 6 A.M.

I took a photo of him with my cell phone.  I really need a new cell phone. 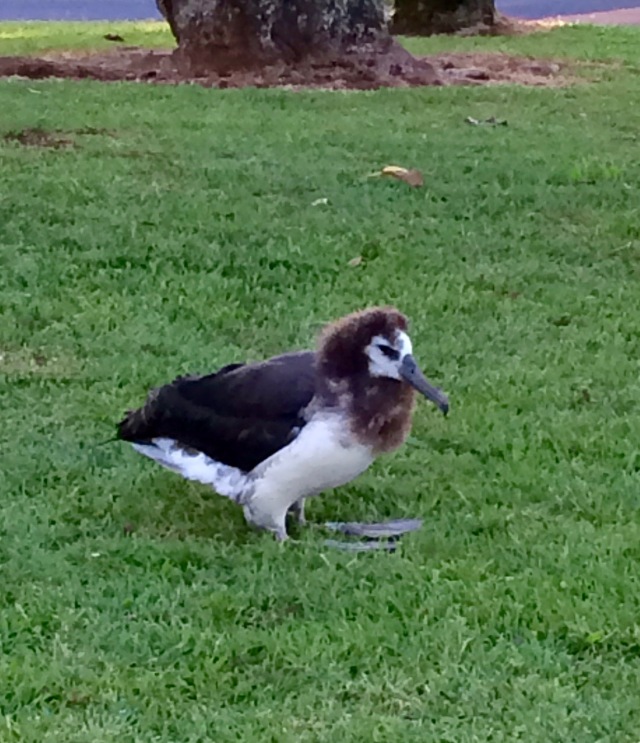 On other occasions I had watched Orion do some flap-hops, the kind albatross chicks start doing as fledging time approaches.  But I had not seen any of the long practice flights down the street that we often see as the time gets near.  I had no idea that he was getting ready to leave Princeville.

When I went back to check on him around 9 A.M. Saturday morning, he was gone.

Fortunately, a visitor noticed him walking by her rental house, which is on the path an albatross takes to get to an ocean bluff favored for takeoffs and landings.  She followed him there, just in time to see him take his first flight.  He flew out over the ocean, strong and resolute.  A baby no more!

Someone asked me if they fledge in hatching order.  It is possible to predict when an egg will hatch, give or take a couple of days, if the date on which it was laid is known.  In a neatly ordered, sensible world, the order of fledging would follow.  However, there are a variety of variables that help to determine when a chick will fledge,  enough that nobody will get rich betting on the exact day.  Some chicks are fed more than others, some are more active, some may have better genes, the list of individual differences is a long one.  It would be unlikely that a chick would fledge before one who was two weeks older, but it is possible that could happen.

A chick on the golf course also took his first flight Saturday morning.  Usually when they leave they still have some of their fluffy, grey-brown baby feathers on their heads, but this one did not.  Undoubtedly some people thought Coltrane was an adult.  The homeowner who named him noticed that he was walking down fairway 6 towards the ocean bluff, and knew that he would soon be gone.  People who live on the golf course look for this sign that a chick is ready to fledge, and will follow him for a chance to observe the miracle of the first flight. 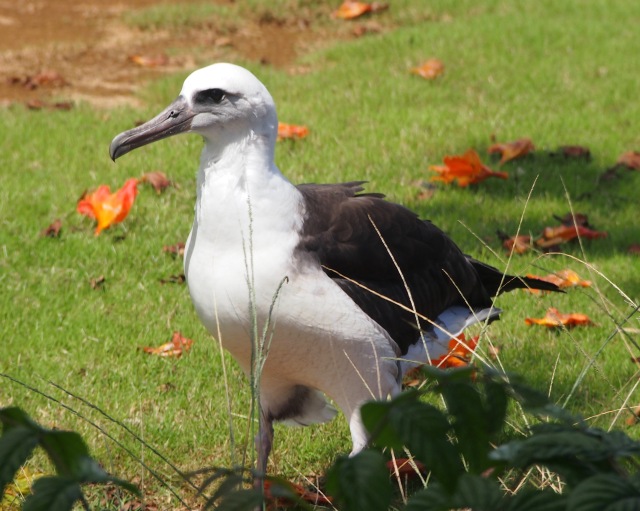 I am starting to see most of the chicks practice using those big wings, waiting for a good breeze to provide some uplift.  Some of them are also jumping up, some are running, some just flap and hope for the best.  Last weekend I took this video of Hibiscus, who relocated to a circle at the end of my street.  Yesterday afternoon, sometime between 1:45 and 4:00, he disappeared; he is probably somewhere over the ocean at this moment.

Another bird on the golf course fledged yesterday.  Glitz, sibling of Gaga and Glitter, had been spending more and more time practicing in the middle of the golf course.  I have some film of him, but it is so difficult to put film in this blog that it will have to wait until I have a few hours to kill.  Take my word for it, he was really trying to be airborne.

This is the time of year that I have a love/hate relationship with.  There is no greater honor than to be present as a chick begins his new life as an adult, flying alone and unprotected into a big, scary world.  If they published a schedule of probable fledging times, I would be more than happy to be there.  Instead, they sit there calmly when I come to check on them, then take off an hour or so later.  I am starting to feel unloved.

4 Responses to Getting ready to leave