July 12th was the last time I saw Kirwan.

I saw him when I walked my dog earlier that morning.  He gave Chico stink eye as we walked by, as he always did.  Ten minutes later I glanced out my living room window.  My neighbor, Roger, was looking around the area where Kirwan had just been sitting.  Roger shrugged as if to say, “I can’t find him!”

I grabbed my gear and went outside.  Roger was already walking down Keoniana Street, and indicated that Kirwan was walking ahead of him.  We followed him as he headed down the street.  I contacted a few people who do not mind getting 6:30 A.M. calls and who will stay to observe an albatross if I have to leave to check on another bird.  My backup team!

Kirwan spent most of he next hour and a half exercising his wings.

Keoniana Point is a favorite takeoff and landing spot for all of the local albatrosses.  There is no vegetation but grass along the area that they leave from.  If there is any wind in the area, it can be felt there.  The ocean winds come directly at them.  I have seen a fledging that began as a chick was being lifted off of his feet by a strong breeze, then the chick flapped his wings and steered out over the ocean.

In the photo below, the point of land above the ocean to the left is the Kilauea Point National Wildlife Refuge.  The trees below the hill where Kirwan is standing are in the area where the path to Sealodge Beach is located.  One year a chick took off and we watched her fall slowly into those trees.  Roger and I went down to the Sealodge path and found her thrashing around in a tree at the top of a cliff.  I was afraid she might hurt a wing.  We could not find any younger person willing to risk breaking something to climb up after her, so I made my way up up and grabbed her while Roger followed, testing shrubbery right below me and showing me where to put my feet when I carried her down.  The bird did not move at all while I was carrying her down the cliff, but the moment I stepped onto flat ground she bit me.  When we got to a little stream that involved a bit of boulder hopping, an activity which I shun, I waded in after telling Roger, “If I start to fall, grab the bird!”  He said, “I know!” 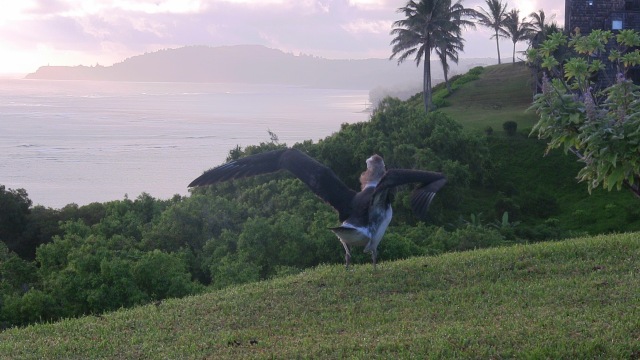 There is a vacation rental located on the next promontory of land to the west of this one.  The people who are currently renting it were walking by during a previous fledging and had come out then to see what was going on.  They had patience enough to wait for some time and were hooked when they got to see the chick take his first flight.  During Kirwan’s fledging, they saw us out there from their rental house and came over.  Two fledgings on one trip!  I don’t know how the home owners will top that if this family comes back next year.

Kirwan tried another part of the bluff,  perhaps feeling how the breeze felt in a different area.

As the wind grew stronger, his wing flapping increased in intensity.  Near the beginning of this clip you will see him do a “sky moo.”  This is a part of the albatross courtship display; the albatross lifts up his bill to the sky and makes a soft mooing noise.   When an adult is doing it, it does remind one of the noise a cow might make.  However, when a chick does it, he seems to do it when he is alone and is excited about something, and the sound he makes is so tiny that it is usually difficult to hear.

The flapping continued to intensify.  Often the chicks poop just before fledging.  To a bird, particularly to a chick making his first flight, every tiny bit of weight counts.

At last the moment Kirwan has been gearing up for.

Bye bye, Kirwan!  I’ll see you in 4 or 5 years!  If you should run into your mom and dad, please tell them that I am saving a patch of garden for them for their next chick.  That offer is good for you, too.  The moment I first see you back here, I will notify the humans who watched you leave Princeville.  They will remember that moment when your feet left the ground and you flew off into adulthood.  Such a great leap for one so young, so inexperienced.

I wish you tons of squid, and fish, and flying fish eggs, and the wisdom that will make you a good parent.  I hope all of your future journeys are safe ones, and that you find your way back here when instinct compels you to return to us.

Princeville is a safe harbor in many ways, visited and lived in by people who will always value the wild things that are still left on this island, and who realize that it is their responsibility as human beings to offer them sanctuary.  It is not always easy or convenient, but in the words of a native American proverb, we do not inherit the world from our ancestors, we borrow it from our children.

Let us return it to them with albatrosses.