Stella reclaims her spot on my lawn

The albatross who spent many days on my lawn calling to flyers overhead last season returned to my yard at the end of November. I named her Stella because she is often at her post when I am walking my little dog in the early morning darkness, so she really is “Stella By Starlight.”  I can hear her at night sometimes clacking to herself as she sits under my office window. 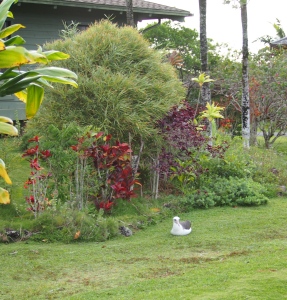 Stella’s mate left her for another in 2009, and she has been returning to this neighborhood every year since then.  Last year she was here on 56 days.  Much of that time she sat on this lawn, calling to the albatrosses who glide above my neighborhood to check it out, then occasionally drift down to have a look around.  On 43 days I did not see her interacting with any other birds.   On 13 days she was was involved in social interactions with 13 different birds, mostly displaying with them, sometimes with two or three at once.  Nobody ever stays with her, they all seem to leave her to see who else is available here.  She never gives up.

In this little video the sounds of displaying albatrosses are prominent.  Stella was not invited to participate, and she is clacking to herself as she builds a nice little nest, showing that she has not forgotten how to make a home for a little bundle of seabird.

When her mate first nested with another female, Stella would sometimes sit near the nest.  I never saw any interaction, she just sat and watched.  What would be her reason for sitting there?  She never acted aggressively to either adult or to the chick.  As long as she did not get too close to the nest, the parents ignored her.  But I have seen the male snapping at her when he was not nesting.  She never responded to his aggression, she just moved on.

There is so much variation in the social behavior of the Laysan albatrosses and there is not much written about it, perhaps because most observers do not watch the albatrosses very frequently.  As someone used to observing one of the most social animals in the world, the chimpanzee, it has been a very pleasant surprise to discover birds that seek each other out specifically to interact with each other.  Sometimes the observer can attach meaning to behaviors, for instance nesting couples greeting each other after being apart for some time.  At other times all the observer can do is to record the behavior and fit it mentally in the “What was that?” file. I would like to think that as time goes by, that file will decrease in size. I have a feeling that while parts may be moved over to the “Oh, I think I get it” file, there will be plenty more new entries to keep me from ever thinking that I know everything about these birds.

2 Responses to Stella reclaims her spot on my lawn