As of today I have seen 13 of the 18 chicks who fledged in 2010.  This is my 9th year observing these birds, and I have never seen so many four year olds.  They must be a very healthy group of individuals.  I am guessing that they will have many children through the years.  It makes me very interested to see next year’s group of 4-year olds.  There were 10 chicks who fledged in 2011.  That year I had an unusual number of regular nesters either not nest or nest and abandon their eggs.  Was it just a coincidence that so many did not nest?  Was there some type of occurrence, such as a decline in an important food source that caused this behavior?  If so, could this affect the survival rates of the chicks from that year?  So many questions, so difficult to get the answers to them.

When a chick fledges I write that in my field notebook, then on the Excel chart I keep for each year.  I yellow out the squares for the fledgling so I can easily see how many have left.  I carry lists of the chicks from each year and keep mental notes each season about which band numbers might indicate that an albatross has returned to his home for the first time since fledging.  Some birds lead rather unremarkable lives as chicks, close to a bluff that they are drawn to by the incoming ocean breezes when instinct pulls them away from their homes, and they take off with a minimum amount of fanfare.  The ones I remember most clearly are the chicks who wandered away from the easy path, the ones who chose to find a more complicated route to the ocean.

Seeing Westin sitting on a lawn not far from where his parents raised him reminded me of his unusual path to fledging.  His nest was next to the Prince Golf Course, across from a street lined with a number of condos.  At the end of the street is the Princeville Westin Hotel.  This is one of the busiest streets in Princeville.

At the end of June in 2010 I got a call about an albatross chick that had shown up at the front door of the Westin.  I asked Bob Waid to give me a ride and was prepared to catch the bird, wherever he was now, and take him to a safe fledging spot. I never know what I will find when I answer one of these calls.  In this case, I was directed to the engineering department at the Westin.  The albatross was boxed and ready to go!  One of the employees there had put a towel over him, picked him up and put him in a cardboard box with holes in it to allow air in.  I generally do not encourage inexperienced people to pick up any albatrosses.  The chicks are not as likely to bite a person as an adult is, but it is possible to injure a wing if the bird is not handled correctly.

In this case, the chick was fine. I looked up his band number on my list of chicks to find that this bird had managed to get himself across the Prince fairways and then walked down the busy street before presenting himself at the Westin’s from door.  His nest had been on an empty lot and he had not been named, so the obvious choice for his name was Westin. 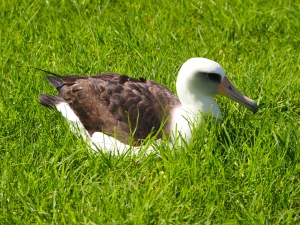 If Westin had followed the path both of his parents regularly took to get back to the ocean his fledging would have been uneventful.  They simply flew down the golf course, straight into the ocean breeze.  I have no idea why he did not go that way.  Perhaps the wind had died down when the urge to leave overpowered his attachment to the area near his nest.  I cannot begin to imagine what motivated him, he is a bird, after all.  Instinct guides these chicks, sometimes to safety, other times to awkward situations.

Thankfully, there are many humans who love these birds, so the odds are good that a caring person will see one who needs a bit of help to find his way out to his new home, the Pacific Ocean.

I look back over the last nine years and remember some of the people who helped the occasionally errant albatross.

I see the lady who escorted a chick across Ka Haku Road, then called to tell me where he was.

I see the truck driver who saw me bend down to pick up a chick who started walking inland.  He called out, “Hey, you’re not supposed to touch those birds!”

I see the Princeville Patrol officer stopping to escort a chick out of the middle of the road.

I see the employees at the Cliffs condos, holding hands and walking towards an albatross who had landed on the tennis court and could not fly out of the fenced in area.  The bird had no choice but to walk out of the open gate.

I see the people who sat on lawn chairs and kept an eye out for a chick who seemed determined to walk down a vertical hillside to a rocky beach below.

There have been many more. Thank you, Friends of the Albatross.  Your love of these birds guarantees that they will have a happy, safe future to look forward to in Princeville.