March and April are the months when I am most likely to see albatrosses that fledged from Princeville and are returning for the first time.  The Class of 2010 has been the source of most of my new sightings this year.  So far, out of 18 fledgelings, I have seen 11, and of these I have seen all but one for the first time.  I have even seen one from the Kilauea Point National Wildlife Refuge and one from Na Aina Kai Garden.  Two of the Princeville alumni had such interesting experiences while fledging that I thought I should share their stories.

Niko was a big, healthy chick who lived in my neighborhood.  When he heard the call to fledge, he walked down the end of the road to land overlooking the ocean, as many chicks have done before him.  Instead of going straight out onto a bluff where the breezes off of the ocean can give a fledgeling the boost he needs for a takeoff, he took a sharp left and walked down into some heavy underbrush.  Fortunately, a vacationer saw him and got a photo of him before he began his trek. 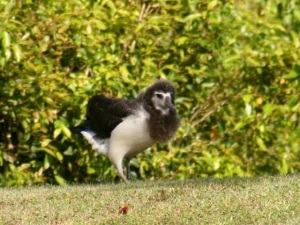 He went down into a canyon greenbelt between my road and the condos on the other side.  It was such thick vegetation, I was afraid that he would hurt himself trying to plow through, or get hopelessly lost. Two days later the vacationer called me.  She had seen an adult albatross at the condos across the way, and he seemed to be having difficulty trying to take off from the bluff.  He kept sliding down the hill.  She was afraid that he would slide all the way down the bluff. My friend and neighbor, Bob Waid, drove me over there.  Fortunately, the bird was not too far down the bluff, so I climbed down and grabbed him, then carried him up the hill. It was Niko! 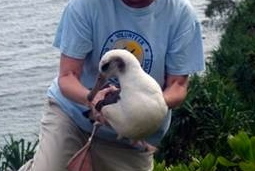 As you can see, he lost most of his chick feathers in the brush during his 2-day trek. This is a photo showing where he started out (near the house at the top) and where he ended up (where I stood when I took the photo.) 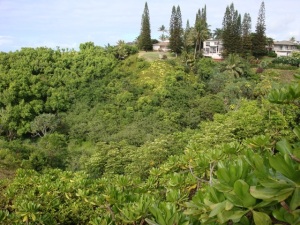 We brought him to the property that was blocking the breezes to the bluff that he was trying to fledge from.  Almost immediately he felt the wind off of the ocean, ran into it and took off.

Why did he head down into the green-belt when it was time to fledge?

Put that on the list of “Things to ask an albatross when we learn to speak their language.”

Or maybe, “The lengths an albatross will go to just to keep my life interesting.”