Someone asked me if I name the albatrosses.  Last year I saw at least 188 albatrosses in Princeville.  I say “at least” because I really do not know how many unbanded ones I saw.  The albatrosses fly between the 4 general areas where they hang out and nest in Princeville.  Often I see the same bird in 2 or even 3 different places in one day.  On one day I saw 5 unbanded birds in one spot.  I saw a total of 183 banded birds from November through July, so I will assume that I saw at least 188.  It just doesn’t make sense to name all of them.  It is easier to know them by the band number, which is what I record in my field notebook and in my Excel worksheet for each year.  Occasionally a homeowner with birds nesting in their yard will start referring to one by a name and that is fine with me.

It has always been my policy to allow the homeowners who have nests on their property to name any of the chicks that fledge from there.  I keep track of those names, and I love being able to tell someone that a bird they named has returned to Princeville.  These albatrosses have interesting names like Robert Frost and Fluffy.  Fluffy is a male who was named by a child whose room overlooked the yard where the parents nested.  Fluffy has raised two chicks of his own and that child is now in college.

Let me say a word on behalf of everyone who has had a nest in their yard.  It is not always easy for them.   Some of the adult birds are clackers.  When I first had a nest in my yard, I thought someone was bothering one of the parents because it sounded like she was constantly snapping at something.  But that was not the problem; the bird just liked to clack, to snap her jaws together and make a loud sound.  I have observed them clacking while grooming themselves and to chase interlopers away, but they also appear to clack for no reason that a human can see.  Sometimes at night an albatross will go on for some time making this noise.  I do not know why some are clackers, some are not, but I do know that the noise can wake people up in the middle of the night.

Even worse are the people who seem to think that the homeowners’ yards are public parks.  One couple was awakened by someone shining a light in the bushes next to their bedroom to see a chick.  People have found strangers standing in their backyards at all hours, taking close-up photos of nesting birds.  This behavior is the reason for this sign, which this albatross chick took to heart. 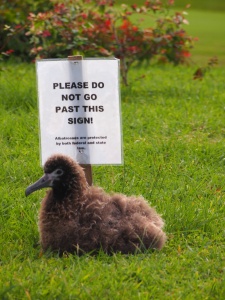 Two females at one nest managed to come up with a fertile egg in the 2006-2007 season in Princeville.  The result was Larry.  He was named by my neighbors who kept an eye on the nest from the time the egg was laid until Larry fledged; he was seen between 6:45 and 7 A.M. on July 14th and was gone by 7:30 A.M.  Sometimes albatross chicks whose nests are not within sight of an ocean bluff fly in the wrong direction when they get the urge to fledge, and if there is no breeze they will even try to walk somewhere.  One once landed on top of a cliff, which required me to climb up after him, carry him under my arm and use the other hand to grab on to strong bushes.  When we got down to the ground, the ungrateful chick bit me.  They have ended up in garages, under houses, and stuck in thick vegetation.  Fortunately, most Princeville residents obey the leash laws.  Imagine what would happen if the chicks fledged in areas where there are dogs running around next door to their nest sites.

We looked around for Larry to make sure he did not end up someplace that he could not fledge from, but we didn’t find him.  He was probably winging his way over the Pacific Ocean by then.

Larry first came back to Princeville when he was four.  For the next 3 years I never saw him anywhere but in my neighborhood.  He spent time displaying with different birds, but the only times I saw him engaged in the “quiet contact” I record for nesting couples it was with KP889, named Dora by the homeowners at the property where her parents had their nest.  Her father, by the way, raised a chick last year at the same time that two of his children were raising chicks in the neighborhood.  We have 3 generations in my neighborhood!

This year Larry and Dora got together November 26th, then Dora left and did not return until December 1st.  On December 2nd, Larry was sitting on an egg.  There was no nest and the egg was way too close to the street.  By the next day the egg was abandoned.  Larry would periodically return to sit on the egg, but he would always leave it again.  Then I did not see him for about a week.  He came back to wait for Dora to return.  He  spent many hours sitting not far from where the egg was located.  In the photo below you can see him standing in a bunch of leaves that he pulled off of nearby plants. 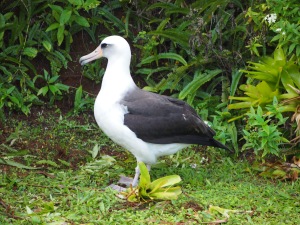 It is not uncommon for first-time nesters to abandon the nest.  Some of them seem to get it right from the beginning, others need more time.  Larry seems to be in the second group.

Maintaining a relationship with a mate is an important activity for these birds, worthy of the extra time spent on land waiting to be reunited.  It takes much less of their time than searching for a new mate.  After 12 days Dora returned, and they renewed their bond.  Dora was sitting on those leaves that Larry had shredded.  They were quietly grooming each other, the “quiet contact” I referred to previously. 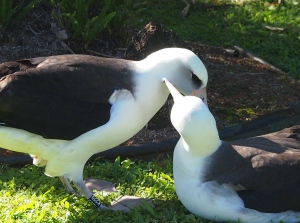 I expect them to try again next year.  Chances are that they will raise a chick next time. I wish I knew why some first time nesters seem to know exactly what to do while others have to fumble around a bit.

These birds keep their mysteries to themselves.  I feel no need to attribute their behavior to human-like motives and concerns.  I think we are part of the background noise to them, a minor annoyance.  They have no idea how dangerous we can be, with our refusal to acknowledge the predatory instincts of our pets and our impacts on weather systems and our plastic sitting in their eating places.

What is important is that we know.