The first albatross returns to Princeville

Posted on November 6, 2013 by tradewindsla

Every year I start checking for albatrosses around November 7th, a few days before I think they will actually begin to arrive in Princeville.  The earliest I have ever seen one is November 11th.  Yesterday afternoon while walking my dog in my neighborhood I heard the familiar bill clacking of an albatross warning the non-albatrosses to stay away.

It was KP618, who hatched 9 years ago in the yard where he is sitting now.  His father disappeared and his mother relocated to the golf course, where she has raised chicks with another female since 2008.  Every year they have a fertile egg.  I think it would be so interesting to do DNA testing of these birds to see who is related to whom.  There might be some surprises there.

KP618 first nested at the young age of 5, and over the years he and his mate have successfully raised 3 chicks.

Welcome home, KP618.  I hope your mate returns very soon, and I look forward to watching you both raise a fat, healthy chick this season. 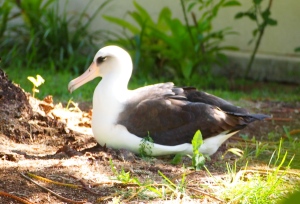 KP618 resting after his long flight

6 Responses to The first albatross returns to Princeville