There are two chicks left in Princeville.  One of them lives on the golf course and is the youngest of them all. 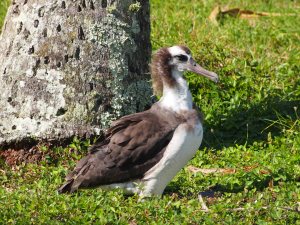 A402 feeling the breeze

His nest is across the golf cart path from a beautiful ocean bluff, with no foliage to obstruct his first flight and with ocean breezes constantly coming at him.

It is the perfect spot for fledging.

Here’s another view from the chick’s nest area.  This is a photo I took a few months ago, and the albatross in the foreground is an adult. 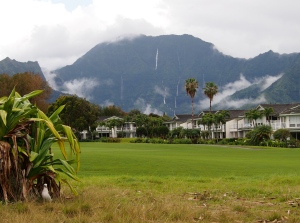 View from the golf course

If the chick tried to fledge in this direction, he would end up lost in “civilization.”  That is one of the challenges the chicks on private property face.  Fortunately all of the Princeville chicks are within a block of an ocean bluff, but even they can get lost if they do not fly into an ocean breeze.  So far this season the trade winds have been so strong that none of the chicks have needed any rescuing, they have found their way to the ocean.  Thanks to those winds showing them the way to the bluffs and providing the uplift they need to take their first flights from there, they have fledged earlier than usual.

It would be disastrous for chicks to attempt to find the ocean if their nest areas were further away.  Unlike the experienced adults, they cannot simply run down a street, flap their wings and take off on a long flight.  They fly low and for short distances, which would make finding the ocean a happy accident for them, would make getting over a fence impossible and would expose them to the risks posed by dogs and cars, which they have no fear of.  They could also end up lost in vegetation or unable to navigate around it.  One year a chick fledged into a greenbelt, hit a tree, and broke his wing.

The other hazard faced by albatrosses on private property is that there is no guarantee that current or future owners will protect them.  Remember, most of these birds return to the same area to nest every year, and so will the chicks that fledge from there.  Albatrosses will not necessarily stay in one small, fenced in area.  They may nest somewhere that is inconvenient for an owner, like in the best ocean bluff areas, or next to the front door, or in the yard where the dogs like to run.  It is against the law to move a nest, and a nester will not follow the egg if it is taken away.  Albatrosses are famous for showing high nest site fidelity.  I have been called to put an egg back in the nest after a parent kicked it out while tidying up.  The parents will not leave their nests to sit on a displaced egg.

As much as I love Princeville and the support the community affords the albatrosses who nest here, nobody can predict what it will be like 100 years from now. The Kilauea Point National Wildlife Refuge is owned, operated and financed by the federal government, with a law enforcement officer who oversees the protection of the resident birds and with regular inspections of the fence surrounding the refuge.  It will always be the safest haven for nesting seabirds, with plenty of safe nesting areas and ocean bluffs to fledge from.  Those of us who love them have to try to ensure that the time they spend here is as safe and as tranquil as possible.

We have altered their natural world in such a short time, and in so many different ways, the albatrosses have not had time to change their behavior to cope; instead they must rely on the instincts that helped them when they nested on flat little islands in the middle of the ocean.  We humans have no such excuse, we must use our superior intelligence to see what these birds really need for survival, and act selflessly to see that they get it.

2 Responses to The youngest chick