The photo below is not that great.  Sometimes we get so used to seeing something that it becomes ordinary to us and we forget to record it, or we take a bad photo and do not bother to go back and get a better one.  The chick is looking away from the camera, so what do I find interesting about this picture?

The adult is Larry, a 5-year old.  My neighbor, Roger, named him after a Sears repairman. We know albatross Larry is a male because he was DNA tested.  He is the chick’s brother.  Almost every time I have seen him this year, Larry was either sitting near his sibling, or in the yard next door or directly across the street from him.

Is it a coincidence that Larry spends all of this time near his sibling’s nest?  He was in the area when his mothers were incubating the egg, he was even there the day the chick hatched.  Did he recognize his mothers, and did they know who he was?  Albatrosses have a good sense of smell.  Do they have a scent that is detectable to close relatives?  Larry’s mothers have been given PMRF eggs at times, but Larry and his sibling were both the biological chick of one of the females.

All of this couple’s nests were in the yards of just four houses in my neighborhood.  Larry’s nest was across the street from chick 8.  So is he hanging out near his sibling simply because he is so attached to this area?  I went back to my database for last year, the first time that Larry returned to Princeville since fledging, and checked carefully to see where I had observed him.

Almost always, I saw Larry in the yard where his nest had been or in a couple of other houses near by.  I have never seen him in any other area.  Many returning albatrosses feel drawn to the area they lived in when they were chicks, but some of them move between areas.  Out of 13 adults who were chicks in Princeville and returned here to nest, and for whom we have data on the locations of the nests where they hatched,  9 built their nests in the very area where they had lived as chicks, and 4 moved to different areas.

These questions about Larry will be on the list of the ones I will ask when someone deciphers albatross language, somewhere after, “How do you choose a mate?” and “Why would you abandon the mate you successfully raised chicks with for this other albatross?”

Whoever is working on that code, please let me know when you have cracked it! 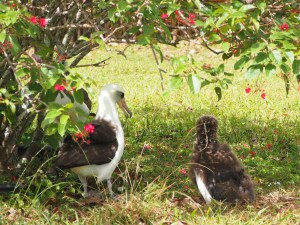 Larry and his younger sibling