The chicks are spending more and more time working on what I call their auxiliary nests. As they move away from the nests their parents built, they use their bills to grab whatever materials are nearby and place them around their chubby bodies.  If they are sitting on dirt, they will often dig depressions to sit in, scraping them out with their feet.  Chicks have a variety of materials to work with: dirt, leaves, grass, twigs, bark, whatever happens to be in the area.  Some of the chicks build a nest and stay in it for a while, others seem to move on shortly after completion. 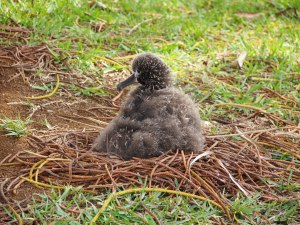 This chick on the golf course moved away from the original nest that was further away  from the albatross sign.  I guess he wanted people to be able to read his sign while checking him out.  I recently had someone ask me if  “that brown bird” was a penguin, so maybe the chick had the right idea.

At first he found lots of mown, dead brown grass in the area:

When that was gone and he felt the urge to build another nest,  he had to yank his own grass and grab any leaves that the wind blew by.  Since he was already sitting on grass he didn’t really need too much cushioning.

Chick at nest 3 and his spartan accommodations

This chick built the nest to the left in this photo, then moved over and made a new one, using leaves from the jatropha bush. 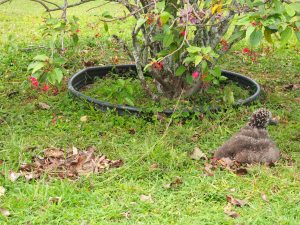 Chick moves on to another nest

The nest is a loose conglomeration of leaves.

The youngest chick has not left his parents’ nest yet, but he has been adding little architectural flourishes.  He pulled hala (pandanus) leaves close to himself.  I love seeing an albatross use a native plant to complete his nest. 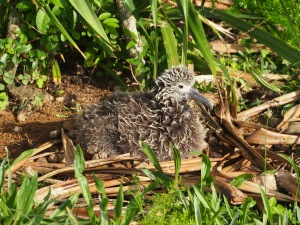 When someone asks me about “suitable albatross habitat” this is one of the aspects I think of, the availability of nest building materials for the adults and chicks to use.  In that aspect they are quite adaptable, and therefore this is by no means the most important qualification for selection of possible future nest sites.

When the chicks start to fledge in June, I will revisit the topic of areas appropriate for albatrosses nest sites.  Most of a habitat’s  suitability has to do with how far it is from the ocean and how safe the areas surrounding the nests are.  We are fortunate that Princeville attracts residents and visitors who keep an eye out for the albatrosses and who are willing to obey the rules that help to keep these birds safe.